2-The musicians of Vodou

2. THE MUSICIANS OF VODOU

Vodou servants salute the spirits in a specific order called regleman (french: règlement; english: rule). In Port-au-Prince, where practices from all corners of Haiti have merged, the dance opens with salutations to the Rada nation, and the Rada regleman begins with the cosmic spirits. Significantly, Ountò, the quintessential drummer, counts among these great lwa. 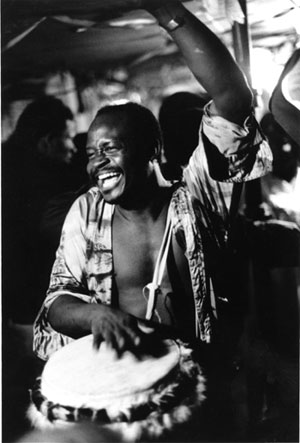 Ountò, the quintessential drummer, smiles through the face of this master drummer during a Vodou dance in Brooklyn, New York.
Photo by Chantal Regnault.

This cosmic heartbeat lives in the bodies of drummers and the instruments they play. His full ensemble consists of a master drummer whose majestic strokes bring down the spirits; a second drummer who plays counterpoint to the master; a third drummer who carries a crisp ostinato; a bell player whose iron tone supports the ensemble edifice; and a bass tambourine who drives the basic pulse. The priest or song leader conducts the whole with a rattle.

Vodou musicians use instruments to identify the nations for whom they are playing. Currently, all of the nations tend toward two spiritual poles known as Rada (cool, balanced) and Petwo (hot, tempestuous), and drummers use these names for two basic instrument types. Both types are single-headed and conical, but the Rada drum requires a hardwood body and cowskin head, while the Petwo takes a softwood body and goatskin head.

A shallow double-headed drum called timbal may be used when the dance kongo is performed. The bell, called ogan, might look like a clapperless bell, a hoe blade, or an adapted machine part. In Rada rites the priest conducts with an ason, a gourd rattle enmeshed in beads, but during Petwo rites he or she switches to a tcha-tcha, a gourd rattle with seeds inside. 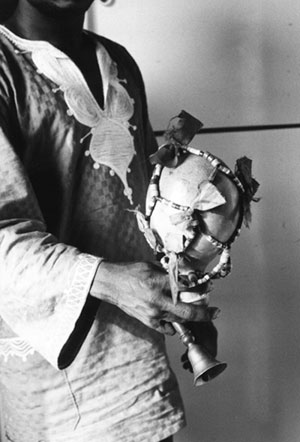 The ason blends the rattling of external beads against the surface of a gourd with the ringing of a small bell attached to the narrow end. Priests conduct Rada rites with the ason.

Each spiritual nation claims one of more dances, and characteristic drum ensemble patterns propel each dance. The bass tambourine or the rattle of the priest often provides the slow pulse that we see in the dancer’s step. Other instruments divide the slow pulse by two or three, and we often hear a deeper level of subdivision. Sometimes, one instrument plays a binary division of the pulse while another divides the same pulse by three. This phenomenon, called hemiola, rises to a high level of sophistication in Vodou music, and the disjunctions that result from hemiola generate offbeat textures that expose the African roots of the music. Meanwhile, Vodou drummers embroider a rich tapestry of tone, using hands and sticks, open and closed tones, slaps, slides, and rim shots. The contrasting sounds of the bell and the rattle further expand the tonal palette.

Drummers cycle their regular ensemble pattern through time with creative variation but basic integrity. The master drummer uses the kase (french: casser; english: break) to shatter the integrity of the regular pattern, causing a feeling of rupture that may result in spirit possession. Musically, the kase uses techniques of contrast, for example, extreme shifts in tonal quality, or the intensification of offbeat texture. After several repetitions of the kase, the master drummer returns to the regular pattern, falling back into alignment with the ogan, which has maintained integrity throughout the episode. Drummers use the kase to accent libations, to mark the transition from one song to another, and to seize the spirit at the onset of possession.

The initiated members of the Vodou society sing with the music of the drums, and any uninitiated spectators from the community who know the songs are encouraged to add their voices to the chorus.

The officiating priest (called oungan if male and manbo if female) might lead the singing, otherwise, a specialist called oundjenikon takes the lead.

Singing is antiphonal: the leader sends (voye, from the french envoyer) a stanza, and the chorus answers (reponn, from the french répondre). The stanza may be repeated one or more times, or a single line might be exchanged antiphonally followed by a return to the stanza. 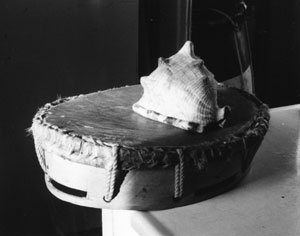 The bas, a goatskin frame drum also called tanbourin, follows the basic pulse of the dance. The lanbi, a conch shell with mouthpiece drilled into the wide end, trumpets Agwe, lwa of the sea.

Vodou songs are sparse in text, with never more than one stanza. A song may segue into another song with no cessation of drumming. Song text is simple so that it might wrap easily around the ritual action it accompanies. Like drum patterns, the phrases of the songs cycle, and when ritual action comes to an end, the music stops with a gesture from the priest. Vodou melodies are nearly all penta- or hexatonic, and most of the former lack a semitone. 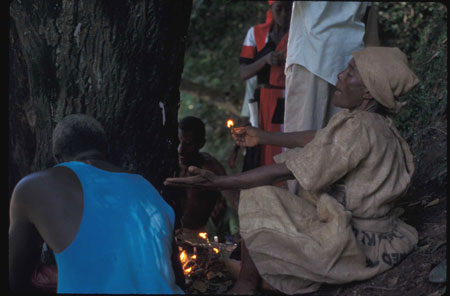 A woman in sackcloth petitions the lwa in song at the foot of a tree during the July pilgrimage to Sodo, a sacred waterfall in Haiti’s Central Department.

Traditionally, drummers and singers learn their art in context, while growing up in Vodou communities and attending the dances. Formal initiation into a society reinforces what one knows and advances that knowledge.

Nearly all drummers are men, and a healthy majority of the singers are women. Both kinds of musicians are expected to develop a stamina that will take them through hours of intense music-making with little break.