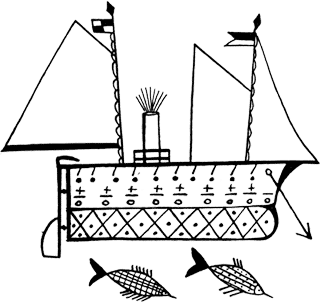 The African ancestors of Haiti carried diverse spiritual beliefs to the Caribbean.

A few people were Muslims, and some had converted to Christianity before enslavement in St. Domingue (Haiti’s colonial name), but the great majority identified and served the spiritual liaisons between God and humans.

Their unnamed traditional religions varied in the details of belief and worship, but these faiths also shared characteristics. During the eighteenth century, as the slave trade to St. Domingue expanded, traders were concentrating on the regions of the Guinea Gulf (modern Ghana, Togo, Benin, and Nigeria) and coastal Congo (modern Gabon, Republic of the Congo, Democratic Republic of the Congo, and Angola).

The peoples of these regions believed that song, drumming, and dance had the power to attract spirits who would then interact with their communities through human mediums, often to bring balance and healing to the community.

Such convictions helped galvanize the revolutionaries who struggled for emancipation and self-rule, especially from 1791 through 1804 when they ended slavery and created the independent Republic of Haiti. 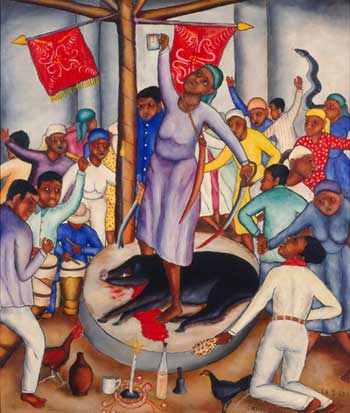 During the first decades of the Republic, traditional Afro-Haitian spirituality evolved relatively free from the interference of State and Church, and it laid a foundation of belief resistant to subsequent forms of persecution. Although we may describe it as heterodox, with much regional variation across Haiti, the belief system maintains consistency sufficient to give it one name: Vodou, a word meaning “spirit” in the language of the Fon of Benin.

Like their cousins in Africa, followers of Haitian Vodou believe in a supreme creator whom they call Bondye (french : Bon Dieu). All spiritual forces manifest Bondye - as cosmic energies, natural forces, or human archetypes.

The human soul links the physical dimension that we inhabit with the spiritual. 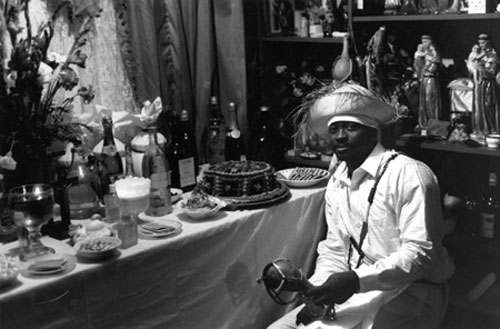 This initiate, seated before an altar in New York City in 1984, is "sou pwen", "on the point" of entering the priesthood. He holds the ason, the rattle with which a priest conducts the dance.
Photo by Chantal Regnault.

Vodou has drawn an elaborate theory of the soul. A person’s individual life force and consciousness interact at all times with the lwa, a term taken from the Yoruba of Nigeria to signify spirits that have the power to possess the physical body.

Vodouists have developed a remarkable ritual that they call a “dance” in order to serve the lwa and speak with them through human mediums. A dance, which celebrates the feast day of a spirit, a Vodou initiation or marriage, or simply good fortune, resembles a party in many ways, so servants might call it a fèt (french: fête; english: feast). They offer the spirits food, drink, music, and a rich display of visual imagery. 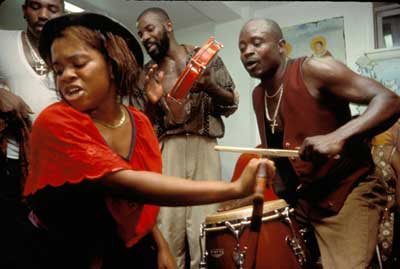 The spirit Gede possesses a woman and dances with the drummers.
Photo by Chantal Regnault.

During this all-night party, servants salute the several nations of their African ancestors whose spirits continue to play a role in their lives. The nations differ in importance in the different regions of Haiti. In Port-au-Prince, the melting pot where many Haitians from all regions have settled in search of work over the last century, a dance salutes spirits of the Rada, Djouba, Nago, Petwo, and Gede nations, in that order.

Music, dance, and possession performances reveal the character or temperament of each nation. The dance, then, is both theatrical and dramatic, and its actors include a priest, a song leader, a chorus (which also dances), drummers, members of the community, and, of course, the possessed.

Expanding on the theater metaphor, the servants of Vodou costume themselves in Caribbean-style clothing and head scarves color-coded for the nation most important to the occasion.

When one is possessed, the others provide him or her with the accessories of the possessing lwa, for example, sunglasses for Gede the Corpse, who is not accustomed to bright light. Sometimes the possessed retires to an antechamber and emerges fully costumed, perhaps as a soldier of the Nago nation. 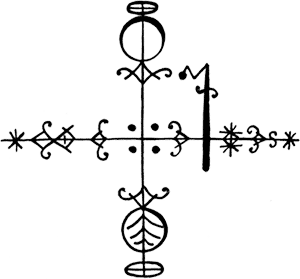 The Vodou theater uses such other kinds of visual imagery as the vèvè, a sacred diagram traced in cornflour on the temple floor, usually at the foot of the altar or the center post of the dance space. The form of the vèvè mimics the spirit for whom it is traced, for example, a heart for Èzili Freda, a gentle spirit of love. Pwen (French: points)—small crosses and stars—embellish the central design and enhance its power to attract spiritual forces. Any kind of object that suggests the spirits can decorate a Vodou altar, called tab (French: table), but servants favor statues, dolls, flowers, candles, dishes of sweets, bottles of liquor, and decorative herbal packets.

The balance of this exhibit focuses on the music of Haitian Vodou, which accompanies the dances performed for the various nations. Music, however, is more than accompaniment. As we shall see, the sacred sounds of Vodou have been key to the vitality of Afro-Haitian culture in local communities of both Haiti and the diaspora, as well as in the global village.