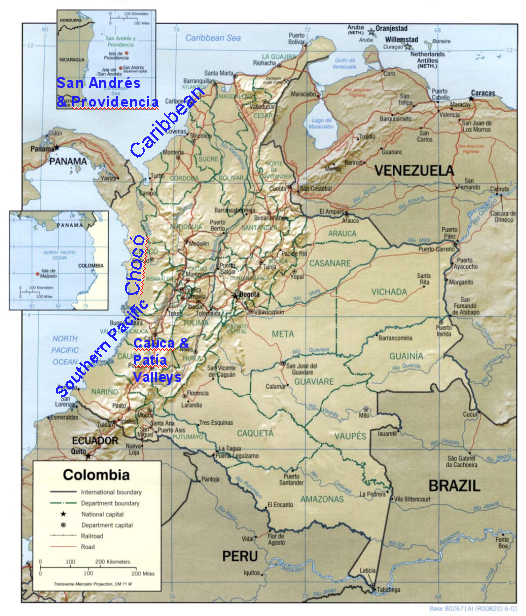 Some 16-24% of Colombia’s population (44 million) is of African descent, giving it the third largest Afro-descendent population in the western hemisphere after Brazil and the United States. This population, spread through different regions in Colombia, has created a rich variety of musical forms in Colombia. Although this dossier will focus primarily on the music of the southern Pacific coast, it is important to recognize this variety among the Colombian regions.

The importation of large numbers of enslaved Africans was commonplace by the 1600s, and continued up to the end of the 18th century. Slavery was abolished gradually, ending definitively in may 21st 1851. The Africans that arrived in chains at the Colombian port of Cartagena were taken from the Senegambia region, the Gold Coast, the Bight of Benin, and central Africa, bringing with them both much of the labor on which the colonial and Colombian economies were built, but also a panoply of cultural forms from their African homelands that was supplemented by the indigenous and Spanish Creole forms they encountered in Colombia.

The particular dynamics of these mixtures, the kinds of work the enslaved Africans and their descendents were made to do, and the kinds of musical and cultural forms that emerged varied according to region. There are five important regions of Afro-Colombian traditional music: the Caribbean coast, the San Andrés archipelago, the Chocó, the Cauca and Patía Valley region, and the southern Pacific coast, although each of these contains a number of sub-regions and points of overlap.

The Caribbean port of Cartagena was one of the major points of entry to the South American mainland for the slave ships, and the Caribbean coast in general is still the home of many black Colombians and a number of Afro-Colombian musical styles.

The best known of these are the related genres of cumbia, gaita, and porro. These feature an ensemble of hand drums, shakers and a bass drum which play in an interlocking rhythm, and often wind instruments like the indigenous-derived flute called gaita. 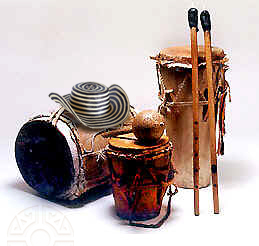 These musical forms have often been incorporated into brass bands called papayeras, especially in the western part of the coast, and in the 1940s were orchestrated for a modern big band, such as those led by Lucho Bermúdez (1912-1944) and Pacho Galán (1906-1988).

Musical and dance expressions that manifest cultural syncretism between African, European, and indigenous expressive forms are also central to the annual Carnival of the Caribbean city of Barranquilla.

Barranquilla Carnaval was inscribed on the UNESCO list of Intangible Cultural Heritage of Humanity in 2003 (more informations here).

The Barranquilla carnival (by UNESCO)

Another traditional music is bullerengue, which features interlocking percussion, and women’s singing, with dancers inside a circle of clapping onlookers, who enter the circle to dance.

The eastern coast is the home of the music, immensely popular in Colombia, called vallenato, which features accordion, a tubular scraper, and a single hand drum.

Another music which has become very popular in the Caribbean is called champeta, and is comprised of local versions of the Caribbean, West and South African popular musics (especially African soukous, highlife, and mbaqanga and Haitian konpa) that began to be played in the late 1960s on gigantic sound systems called picós. 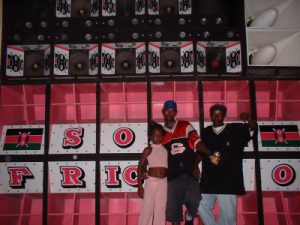 Finally, the town of San Basilio de Palenque, a town founded by runaway slaves in the 17th century, is the home not only a creole language with elements of both Spanish and the central African KiKongo language, but a drum-based percussion music called lumbalú. The cultural space of San Basilio de Palenque was designated Intangible Cultural Heritage of Humanity by UNESCO in 2008 (more informations here).

The cultural space of San Basilio de Palenque (by UNESCO)

San Andrés and Providencia are two small islands in the western Caribbean, originally settled by the British and their English-speaking slaves. The native population is, like that of Antillean islands like Jamaica or Barbados, Protestant and English- or patois-speaking.

The music of San Andrés and Providencia emerges from this heritage. Religious music is largely comprised of English Protestant hymns sung by a church chorus.

The islands also have a traditional dance band, featuring guitar, mandolin, violin, a percussion instrument made of a donkey’s jawbone, maracas, and a string bass made of a washtub. This ensemble performs mento music, as well as other musics that were popular in the Caribbean in the late 19th and early 20th centuries such as contradanse and polka.

Chocó province is an isolated rainforest region along Colombia’s northern Pacific coast and the border with Panama. Its main artery, the Atrato River, connects it with the Caribbean. The Chocó was an important destination for African slaves, who were sent there to work the rich gold mines of the region.

The best-known music of the Chocó is the lively brass band music called chirimía. This music includes such international genres as polka, danza, contradanza, and mazurca, probably imported from the Caribbean, as well as local forms like abozao and levantapolvo. The chirimía band features homemade bass and snare drums, cymbals, euphonium (a small tuba) and one or two clarinets, and in its older version, reed flutes as wind instruments.

Chirimía is particularly popular in the October festivals of San Francisco (affectionately nicknamed “San Pacho”) in the city of Quibdó, which features over a month of chirimía dancing in the streets. San Pacho, too, has been inscribed as Intangible Cultural Heritage of Humanity by UNESCO (more informations here). 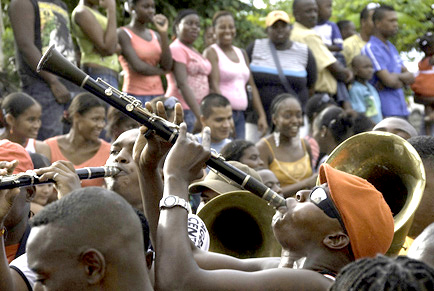 Tambora, a musical form usually associated with neighboring Panamá, and which features drums and singing, is found on the coast of the Chocó.

The province, like parts of the Caribbean coast, assimilated the Cuban sexteto ensemble and its repertoire of son music in the early 20th century.

Some of Colombia’s best-known salsa bands are from the Chocó.

The Cauca Valley was the destination of many enslaved Africans who worked the plantations, sugar mills, cattle ranches and gold mines there, and was the home of many of the wealthy white Creoles who owned gold mines in the Chocó and the southern Pacific, from which the Cauca Valley is separated by the western chain of the Andes Mountains.

The music of the region has not been very well studied. One major form there is the Patía string band music called bambuco, which shares characteristics with both the Andean string music of the same name and southern Pacific currulao music.

Cauca Valley fuga may be related with southern Pacific juga and is played either by string bands or brass bands, the latter during the religious ceremonies for the Adoration of the Christ Child, held in February.

Rural zones of the region also occasionally hold a ceremony similar to the southern Pacific chigualo and the Chocoano gualí.