The 1965 film Thiruvilaiyadal is an excellent example of the mythological genre in Tamil cinema. Director A.P. Nagarajan set out to make a film about the 64 holy sports (‘thiru vilaiyadal’) of Siva, actions and antics Siva designed to test his devotees, originally set down in the 16th century Thiruvilaiyadal Puranam. At the beginning of the film Siva and Parvati issue a challenge to their two sons, the elephant-headed god Ganesha and his younger brother Murugan, saying that they will give a sacred mango to whichever of them is first able to circumnavigate the world three times. While the athletic Murugan tears off at supersonic speed around the globe, the rotund Ganesha simply walks three times around his two parents, winning the fruit as, he states, his parents are the whole world to him. Murugan is angry at not winning the fruit, dresses as a hermit and announces he is going to leave for his mountain temple in Pazhani.

At this point the legendary poet and devotee of the Tamil language Avvaiyar appears, in her orange renunciate’s robe, to try to cool down the impetuous Murugan, but he is resolute: “Oh Avvaiyar, how can I accept your consolations? Am I not competent to get a fruit from my parents? Can they not give that fruit to me?” She responds by singing “Pazham Ni Appa”, telling Murugan not to be upset, that he has no need of winning that fruit because he is already himself the sacred fruit of Tamil knowledge. Murugan is specifically associated here as in many other poems as the primary Tamil kadavul (Tamil god) and guardian of the Tamil language. The poem begins with a line which expands as it repeats, Avvaiyar addressing Murugan : 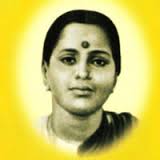 The role of Avvaiyar is played in the film by a great popular singer of devadasi heritage, Ms. K.B. Sundarambal. Audiences at the 1965 film would have easily and intuitively associated the singer Sundarambal with Avvaiyar. Sundarambal had played the role of Avvaiyar in an earlier film, so the singer and legendary poet were already indelibly associated in the public imagination. In the early part of her career Sundarambal formed a stage partnership with, and then married, the male singer S.G. Kittappa. The duet was extremely popular but Kittappa died when Sundarambal was only 25. She left the stage for a concert career and also became heavily involved in the Congress Party and the independence movement. She was particular to sing only Tamil songs on stage, and she was an active member of the Tamil Isai (Tamil Music) Movement of the 1940s in Tamil Nadu. This movement tried to redress a long-standing situation in which Tamil language songs were not accepted by many connoisseurs as legitimate classical art music. Many of the major Karnatak classical artists preferred the music of the famous Karnatak ‘Trinity’ of composers, especially the Telugu language compositions of the composer Tyagaraja (1767-1847) and Sanskrit compositions of Muttuswamy Dikshitar (1776-1835); musicians like Sundarambal made it a mission to have Tamil music recognized in its homeland, accepted on a par with Telugu and Sanskrit compositions.

Song 5. ‘Pazham Ni Appa’ - ‘You are the fruit’
(song begins at 2:20 of clip)
Music composed by K.V. Mahadevan
Lyrics composed by Kannadasan
In film Thiruvilaiyadal, 1965
Sung by K.B. Sundarambal

Anupallavi
Sabai thannil, thiru sabai thannil
In an assembly; in a holy assembly;
Uruaagi pulavorkku porul kurum
Taking a form in Divine assembly, you taught all the bards
(You’re the fruit… of Tamil knowledge)

Karthigai penpal undai - thiru
You were fed by 'Kartigai' maidens, by divine Kartigai maidens
Ulagannai annaipalle thirumeni oruserntha
Becoming one by the embrace of the Mother of the world
(You're the fruit… of Tamil knowledge)

Maruvathu manam seruvathu inam
What changes is the mind; what unites is one of same kind
Theriyatha Murugana ni
Don't you know this, Murugan?

Erumayil eru isanidam nadu
Get on your peacock! Go back to the Lord Shiva
Inmagum katava ni
Come to show the smiling face

Etru kolvay kuti selven
He'll accept you, I will take you
Ennudan odi va ni
Quickly come along with me