The song ‘Inimel Avarkkum’ is in the padam genre. Tamil language padams, most written between the 18th and 19th centuries, are love songs in which a heroine (‘nayaki’) expresses her love for a hero (‘nayaka’), though rarely directly to his face, rather, more often through the intermediary of a ‘sakhi’ or friend, who is sent by the heroine to the hero to intercede on her behalf. The hero who is addressed in padams is sometimes a person, but more often a Hindu deity.

Bhakti as Falling in Love with God

To understand how a devotional text could visualize a romantic relationship between a devotee and his/her deity, it’s necessary to understand the concept and the history of bhakti. An intimacy which may encompass romantic love, often expressed in an informal mode of address, is actually built into the bedrock of South Indian Hinduism. From approximately the 7th – 9th centuries A.D. occurred what is known as the Tamil bhakti movement, taking place first in South India, and later spreading across the subcontinent into many other languages. Its adherents were in part reacting against the formalism of Vedic religion and the way that access to the divine was mediated by a class of priests. They opted instead for a style of worship which stressed the ability of a worshipper to approach his/her god directly, without intermediaries.  The idea grew that a worshipper need not recite Sanskrit mantras (or need to employ a trained priest to do so), but rather simply feel love and devotion towards his/her chosen deity. The mode of romantic love so prevalent in padams derives directly from concepts evolved in the bhakti movement. Stories from the bhakti poets stress informality and intimacy even to the point where a devotee can sometimes compel a deity to take particular actions by his/her accumulated acts of devotion (see discussion of ‘Nadamadi Tirinda’, Song 6).

Historically some deities have been found to be more appropriate subjects for a romantic treatment in padams than others. Dancer Smt. Kalanidhi Narayanan, an esteemed expert in abhinaya (gestural language of the bharata natyam dance form) uses the term “Love Rajas” (Kings of Love) to describe particularly playful and virile deities whose mythology is full of stories of their sports and exploits (Narayanan 1990). Prime examples are Murugan and Krishna, who hides the Gopi cowherd maidens’ saris when they remove them to bathe in the river, who steals butter, and does a host of other mischievous pranks. A linguistic consideration enters here, as while padams written in the Telugu language are primarily ‘on’ Krishna, the vast majority of Tamil language padams are set on the primary Tamil deity Murugan. Examples of deities who rarely appear as heros in padams are Rama, severely monogamous by nature, and Siva in his form of Nataraja, ‘king of dance,’ who even though well known for the iconography and mystical significance of his dance, is not a playful intimate deity in the same way as are Murugan and Krishna.

Murugan’s Place in the Tamil Tradition

The Tamil language is a member of the Dravidian language family, distinct from the Indo-European languages of northern India. Tamil is one of the four major South Indian languages together with Kannada, Malayalam, and Telugu. Tamil is also a classical language with a large and rich body of ancient literature known collectively as Sangam (‘Academy’) literature. The main components of the Sangam literature are the Eight Anthologies (Ettuttokai), the Ten Long Poems (Pattuppattu), and the grammar Tolkappiyam. While estimates of its antiquity are uncertain, some scholars believe that there were three successive ancient Sangams, lasting 4,400, 3,700 and 1850 years respectively, “with a membership of gods, sages, and kings as poets” (Ramanujan 1985:ix-x).

One major aspect of Sangam literature is that the Tamil region is divided into five tinai, ‘landscapes’. They are Kurinji (mountainous region), Mullai (forest region), Marutham (agricultural region), Neithal (coastal region) and Palai (desert region). The god Murugan is especially associated with kurinji, the mountainous region, and songs on Murugan almost always make reference to this in their pallavi section.

Padams, like the main Karnatak concert genre kriti, are structured in three parts: a performance begins with the pallavi, then moves to the anupallavi, returns for a short reprise of the pallavi, moves to the caranam and finishes with another reprise of the pallavi section. The pallavi, first section, has a central role in the text because it is a refrain line to which the singer returns after the anupallavi and the caranam – wherever the rest of the text goes, it always returns to the pallavi line for final emphasis.  In the anupallavi (second) section the ‘nayaka’, hero, of the song is revealed, the deity often being linked to a particular form he is affiliated with at a temple in a particular locality. The caranam typically has more text than the other two sections, and often serves to give examples of or otherwise clarify the statement made in the pallavi.

In Inimel Avarkkum, the anupallavi refers to Lord Murugan or Kandasami as the lord of Sigandi Mountain. Sigandi, also known as Kunrakkudi, is the location of a famous Murugan temple, the Shanmukanathar temple. So, the singer is addressing her lovelorn state to the particular form of Murugan worshipped in Kunrakkudi. Historically it is entirely possible that this song was performed by devadasis attached to the Shanmukanathar temple.

India is home to two systems of classical art music, the Karnatak system in the South of the country and the Hindustani system in the north.  The two systems are similar in important ways – first of all, they identify the two most important components of the music as ‘raga’ and ‘tala’. Each composition in the classical art music styles is set to a raga – a particular configuration of notes and melodic phrases – and a tala – rhythmic cycle. Another important feature of the music is its use of a drone tone, an unchanging note which articulates the system tonic and serves as a melodic reference point for musicians. While classical South Indian music concerts have always contained some songs in the Tamil language, historically many patrons and connoisseurs of classical music considered Sanskrit or Telugu compositions to be of a higher quality than Tamil compositions (this can be partly but not wholly explained by the fact that Telugu-speaking Nayakas were one important lineage of Rajas of the Tanjavur Kingdom). The exclusion of Tamil songs from classical concerts in the Tamil-speaking region of South India offended lovers of the Tamil language, leading to controversy and to a movement in the 1940s to persuade classical musicians to include Tamil songs in their concerts (see discussion of the Tamil Isai Movement below).

Instruments and their Social History

The primary melody instruments used in South Indian Karnatak classical music are the human voice, the indigenous chordophone vina, the kuzhal bamboo flute, and violin (structurally similar to the European violin but tuned differently). The principle percussion instrument is the mridangam double headed drum. In concerts it may be supported by the kanjira, a small frame drum with a single jingle, the ghatam clay pot, or the morsing, jaw harp. Other musical forms in Tamil Nadu introduce other musical instruments into the mix. For example, the ‘periya melam’ ensemble plays in temple ritual functions and also (for the last 50 years or so) on the Karnatak concert stage. Its characteristic instruments are the double read aerophone nagasvaram (similar to a low-pitched oboe in sound), and a double headed drum called tavil. Its barrel is thicker than a mridangam, and played with a stick in one hand and fingers to which plaster thimbles are applied in the other. A large variety of further membranophones is employed across a wide range of Tamil folk song genres. 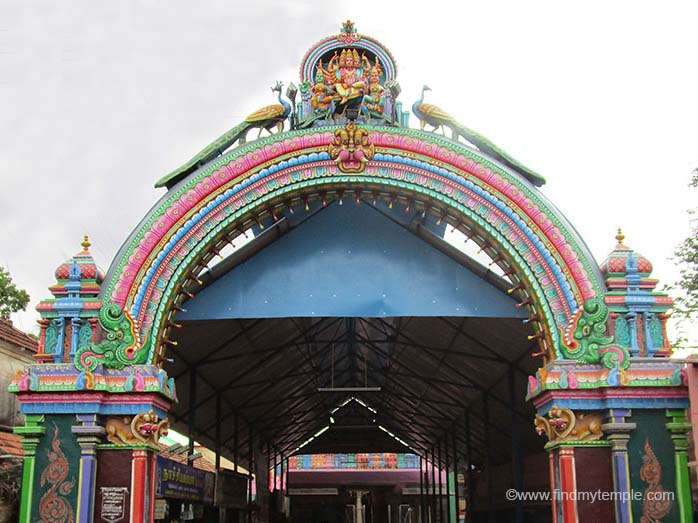 Instruments have a social history in India. A century ago, particular instruments were associated with people of particular caste, hereditary social groupings. Upper caste musicians played the metal-strung chordophones violin and vina but avoided the flute due to the perceived pollution caused by contact with saliva, and all membranophones due to the pollution of touching animal skin. The restrictions placed by Brahmins on their choice of instruments meant that, a century ago, non-Brahmin musicians had a virtual monopoly on instruments considered polluting by the Brahmin caste. Over the course of the twentieth century, Brahmin musicians began playing instruments they had formerly avoided, so that today there are practically no restrictions.

Inankatu adi podi
There can never be any reconciliation. Go, friend!

Kanda swami valiya vantu nalam connalum
Even if Lord Kanda (Murugan) comes to me speaking sweet words, (from now on…)

Caranam
Etu adi oru potum marakkumo, paril
Hey friend - do you think I could ever forget this?
Inimel endhanai pol pen pirakkumo sol, konda
There will not be any sincere woman like me born into this world
Kadal manatai minci parakkumo
The great love I had for him – will it just fly away?
Karanda pal tirumba poy curakkumo?
Tell me! once the cow is milked, can its milk return to the udder?
Polla sutukkarikal mittira bedattai nijam enru
Deceitful women are telling slanderous lies about me as if they were true
Kadil kontu en manatai sotittu arinda mattum
He listened to those women; testing my feeling he came to his own conclusion
(from now on…)