One of the major Tamil films of 1942 was ‘Nandanar,’ a film with a strong social emphasis which directly considered the issue of untouchability in South India. The film was based on a group of songs by the composer Gopalakrishna Bharati (1810-1896), who composed an opera on Nandan, a Dalit (formerly ‘untouchable’) devotee of Siva who had a passionate desire to have darshan (to have sight, i.e. to worship) of Siva at the great temple in Cidambaram. But, as Dalits were not permitted to enter and worship in Hindu temples at that time, Nandan’s pilgrimage to Cidambaram is frought with uncertainty and pathos.

Bharati’s song cycle ‘Nandan Charitram’ (‘Story of Nandan’) was first performed in a ‘harikatha’ manner similar to Arunacala Kavirayar’s opera on Rama - a small group of musicians would go around to different towns and villages, performing songs about the life of a god or hero, providing a multimedia entertainment interspersing songs with narration and dance. Just as Arunacala Kavirayar’s songs on Rama became tremendously popular, Gopalakrishna Bharati’s songs on Nandan quickly gained renown around his home area. The Hindunewspaper reported that music lovers from nearby Karaikkal (a French territory in the 19th century) were staying out so late to listen to Bharati’s songs that they were sleeping through work :

The song lyrics to Bharati’s Nandan Charitram were published in 1861; by the end of the 19th century Nandanar had become a play, then a silent film, and then was remade again as a talking film in 1933, 1935, and 1942. Bharati’s songs from Nandanar remain extremely popular in concert performance today. 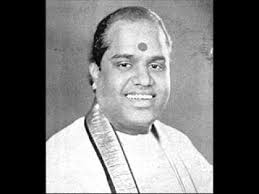 M.M. Dandapani Desikar (who earlier sang Song 9, ‘Jagajjanani’) performs ‘Vazhi Maraittu’ from the film. In a short prelude to the song, Nandan and group of fellow worshippers approach the entrance to the temple but find that their line of sight to see the deity Siva inside is blocked. Nandan starts singing beginning with the anupallavi section, wondering whether even after coming all this way, he will have the opportunity to see Siva. As the pallavi states, it is Siva’s bull Nandi who is sitting, “just like a mountain,” squarely in the path and blocking his view. In the caranam Nandan indicates that he understands he is not allowed inside the temple, asking just that if Nandi could move just a little bit, he would be able to glimpse Siva from the street outside the temple. Finally, Nandan’s plea is heard as the statue of Nandi moves to the side, and Siva is visible to Nandan and his group of friends who are thrilled and transition to an energetic and joyful song.

Gopalakrishna Bharati’s songs in Nandanar are mid-19th century compositions. It is notable that in them Nandan does not present an outright challenge to caste orthodoxy or argue in favor of his Dalit community having equal rights to others in regards to temple access (see Sherinian 2013 for a recent study of Tamil Dalit self-empowerment). Rather, instead of asking or demanding to be let in, he simply requests, “Won’t your bull move just a little bit?” Gopalakrishna Bharati himself was a Brahmin, and wrote from that social position, sympathetic to bettering conditions for lower caste Indians although stopping short of calling for revolutionary change.

Pallavi
Vazhi maraittirukkude, malai pole
My view is obstructed – just like a mountain

Anupallavi
Pavi paraiyan nan, inda uril vantum ivan
My cursed self, even after coming to this place
Pavam tireno
I am not rid of my sin
Undan padattil sereno ereno
Can I not reach your feet, to lift me up?
Sivaloka nada
O Siva, Lord of the Kailas.