While Song 8, ‘En Palli Kondir,’ focuses on Vishnu’s incarnation as Rama, here in ‘Taye Yasoda’ the focus is on another of Vishnu’s ten incarnations, Krishna. Uttukkadu Venkatasubba Ayyar was an 18th century composer and devotee of Krishna, who composed most of his known songs on that deity. The statue of Krishna taken out of the Uttukkadu village temple in processions during temple festivals is in the form of Krishna dancing. This dancing Krishna appears to be the form of the deity Venkatasubba Ayyar was most attracted to and wrote many of his songs on.

The original tunes of the songs fell out of use as Venkatasubba Ayyar was not known to have had any disciples who learned directly from him, who could pass the melodies to successive generations. In the mid 20th century a new interest arose in the music of Venkatasubba Ayyar, led by musicians who gave lecture demonstrations on the composer, and by famous dancers of the day such as Smt. Kamala who in her yearly concerts at the Madras Music Academy performed a different composition of Venkatasubba Ayyar each year between 1957-60. As part of this revival, scholars published books containing his song lyrics, and musicians set new tunes for them. ‘Taye Yasoda’ became one of the most popular songs in the repertoire of Karnatak musicians and bharata natyam dancers, and remains so today.

This excellent recording by three of South India’s top Karnatak musicians demonstrates how in Karnatak classical music, the basic form of a song can be expanded upon through several genres of improvisation to create extensive performances in length. Vocalist Madurai Mani Ayyar (who called Venkatasubba Ayyar’s songs “striking and gripping”), violinist Lalgudi Jayaraman, and mridangist (drummer) Pazhani Subramania Pillai, together with an unidentified second vocalist and ghatam (clay pot percussion) performer, recorded ‘Taye Yasoda’ on two sides of a 78RPM record. As discussed earlier, one of the consequences of the advent of recording technology was to impose a length limit on a performance. The double sided 78RPM recording of ‘Taye Yasoda’ allowed the musicians a performance length of six minutes, twice the time available on a single sided disk, but even the available six minutes was much less time than they were accustomed to use for this song (which seems to have been a favorite in their repertoire) in live concert performance.

In the audio recording of Song 10, Madurai Mani Ayyar performs two forms of improvisation. For about the first minute and a half of the recording he sings alapana. In alapana, a musician improvises melodic variations on the notes and scale of the particular raga a piece is set in, introducing the melodic ideas of the raga to the audience and preparing them for the song to follow. During alapana the vocalist uses vocables such as ‘ta na na’ or ‘ta ra ra’ rather than words, the accompanying violinist discreetly shadows the notes of the singer, and the percussionist(s) sits silently. Alapana usually starts low in the melodic range, moves up to the top end of the range, then settles back in the low or middle range. At the completion of alapana, the musicians begin the composition.

At the beginning of the caranam Mani Ayyar performs a second improvisation called niraval for approximately one minute, from 3:45 – 4:50. In niraval, a singer takes a particular line of a song and improvises a series of new melodic settings for that line of text. Mani Ayyar can be heard singing the text ‘kalinil cilambu’ (‘with tinkling anklets on his leg’), repeatedly, with slight melodic variations each time, and the violinist has brief opportunities to contribute his own niraval improvisation in between the vocalists’ lines.

In order to get a real sense of how a composition can be expanded further in performance in a live concert setting, as a supplementary resource see https://www.youtube.com/watch?v=sqO7GF6EHMs, a recording of one of Madurai Mani Ayyar’s concerts (with the same accompanists as on the 78RPM recording, Lalgudi Jayaraman and Pazhani Subramania Pillai). The artists perform a thirteen minute version of ‘Taye Yasoda” (beginning at 2:12:40 on the Youtube file). It is interesting to note that they perform the niraval improvisation at the exact same point in the song as on the 78RPM recording - the beginning of the caranam section. Clearly Madurai Mani Ayyar is captivated by the image of Krishna dancing, returning over and over again to the line “with anklets jingling”. While the niraval on the 78RPm recording lasts about 45 seconds, the live concert has much more extended improvisational passages - nine minutes are devoted to niraval (beginning at 2:15:02 on the Youtube file) and another improvisational form, svara kalpana (beginning at 2:22:30). 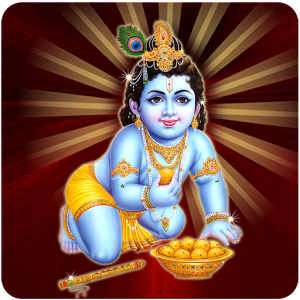 The deity Krishna as a child.

Why did Taye Yasoda strike such a chord with the public? Its appeal is doubtless partly because it narrates well-known episodes of the young Krishna’s playful exploits, from the point of view of a woman who has been scandalized by her encounter with him. She complains to Krishna’s mother Yasoda that when she embraced Krishna, thinking he was just a boy, he kissed her fully on the mouth – “This is no boy, Yasoda; your son Krishna does all kinds of tricks!” In the second and third caranams (not included on the 78RPM recording) the woman continues to chide Yasoda for not keeping a close enough watch on the behavior of her son – he steals the womens’ saris when they are bathing in a stream, and he takes butter and stuffs it into the mouths of sleeping guests and then runs off. At the very end of the song, the woman has the profound realization that the badly behaved young boy is actually the divine Krishna: “Right at that time when I was looking at his beautiful face, he opened his mouth and, just like it was another of his magic tricks, he showed me all the 14 worlds, Oh Mother Yasoda”.

Caranam 1
Kalinil silambu konja kai valai kulunga muttu
With tinkling anklets on his leg, with bangles shaking on his arms
Malaikal asaiya teru vasilil vandan
With garlands of pearls swaying as he moved, he came in our street to our door
Vanorkal ellam makizha manidarkal ellam pukazha
Pleasing all the Devas, being praised by all the people
Nila vanna kannan ivan narthanam adinan
The dark colored Krishna danced.

Balan enru tavi anaitten anaitta ennai
Thinking he was a boy, I embraced him and then,
Malai ittavan pol vayil muttamittan adi
Like a husband, he kissed me on the mouth

Balan alladi un makan jala mika seyvadu ellam
This is no boy, Yasoda! Your son Krishna does all kinds of tricks!
Nalu perkal ketka solla nanam mika akutu adi
To have to say this within earshot of other people is very embarrassing!

Anda Vasudevan ivan dan adi Yasoda
That Vasudevan (Krishna) is him, Oh Yasoda,
Maindan enru eduttu anaittu madimel vaitten adi
Taking him to be a boy, I embraced him and took him on my lap
Sundara mukattai parkkum velaiyile vay tirantu
Right when I was looking at his beautiful face, he opened his mouth,
Indira jalam polave ir ezhu lokangalum kattinandi
And just like it was another of his magic tricks, he showed all the 14 worlds!