We begin an exploration of the Tamil language songs of South India with the multi-media pageantry of film, one of India’s most important cultural industries and a source of popular entertainment for over a billion people worldwide. The song Maraintu Iruntu introduces the two main characters of the 1968 film Thillana Mohanambal – the dancer Mohanambal and the musician Shanmugasundaram.

Unpacking the names of the two main characters begins to help understand the social context of the love affair being set up in the plot. The dancer’s name Mohanambal translates as love, passion (mohanam) with the added suffix ambal, a respectful word for woman or mother. The male lead’s name Shanmugasundaram combines Shanmugam, literally ‘six faces’, one of the names of the preeminent Tamil deity Murugan, with ‘sundaram’, beautiful. The musician Shanmugam’s personal name thus also has a divine association (as with “Jesus” in Spanish speaking countries), further enhancing his aura and stature for the film audience. The actor who played Shanmugam in the film was Sivaji Ganesan, the pre-eminent Tamil movie star of his generation, while Mohana was played on screen by Padmini, a famous movie dancer who came out of retirement to take what would become her most famous role. Mohana’s singing voice in Maraintu Iruntu was performed by playback singer P. Susheela.

From Novel to Film

The film Thillana Mohanambal was based on a novel of the same name by Tamil author Kothamangalam Subbu which appeared in serial form in 1956 in the Tamil weekly Ananda Vikatan. As Indira Peterson has written (Peterson and Soneji 2007), the novel attracted a huge public and the whole population of Tamil Nadu state waited with breathless anticipation for each successive weekly installment to move the action ahead. Why was the story so riveting to the Tamil public? The story told in the film is rooted in a thousand year plus history where music and dance for Hindu temple ritual were to a large extent hereditary and caste-based practices. Hereditary male temple musicians, evoked by Shanmugam in the film, were known as the ‘periya melam’, (big ensemble), while the instrumental group that accompanied temple dancers such as Mohana and her group, was known as the ‘cinna melam’ (small ensemble). For the 1968 film audience, fascination, controversy, and nostalgia converged upon the filmic treatment of Mohana, a young woman who respected the ancient and beautiful art of her devadasi ancestors but rebelled against fulfilling the traditional social role of a devadasi as mistress (in an important subplot, Mohana’s mother is constantly trying to get Mohana to hook up with one or another lecherous wealthy potential patron, while Mohana only has eyes for the relatively penniless musician Shanmugam).

Temple dancers were known as ‘devadasi’, literally ‘servants of god’. Since at least the time of the Cola empire (ca. 9th – 13th centuries A.D.) devadasi dancers and temple musicians were patronized and supported by Hindu temples and royal courts. Moving closer to the present day, with the rising influence of the British and the decline of indigenous Indian states, devadasis became increasingly controversial figures. By the time of the Victorian period in the latter part of the nineteenth century matters came to a head. The social dissatisfaction and shame many upper caste and upper class Hindus felt towards devadasis focused on their sexual liaisons outside marriage.

Devadasis were ritually married to the gods of Hindu temples, not to human men. While some devadasi women obtained great influence, becoming famous authors and philanthropists due to their erudition and their popularity as performers, there were also endemic social abuses of devadasis who in effect had to turn to prostitution to make a living. At the turn of the twentieth century social reformers campaigned for the abolition of devadasi dedication, and among other things took to ‘outing’ in newspaper advertisements upper class art connoisseurs who tried to organize private salons featuring devadasi dancers. By the 1930s a movement was in full swing to ‘save’, i.e. raise the respectability of, the dance by having young upper caste Brahmin women (who would never previously have dreamed of performing in public) appropriate the practice from the hereditary practitioners (Allen 1997). Reformers thought that the dance itself would gain respectability by having respectable ‘family women’ take over the practice. Temple dedication of devadasis was outlawed in the Tamil region in 1947, but devadasis had already virtually completely left the field of dance, in some cases continuing as singers and in many cases leaving the hereditary art altogether.

Genres of Film: The ‘Social’ and ‘Mythological’

While the earliest Indian films were substantially adaptations of stage plays, focusing on stories from Hindu mythology, by the mid twentieth century the genre of ‘socials’ emerged, films which addressed contemporary social issues, such as Thillana Mohanambal (for more information on the history of Tamil cinema consult Baskaran 1996). As they settled into their movie seats, the viewers of 1968 were able to look back at the profound social upheavals centered around the devadasis from the distance of a generation. They could root for Mohana and Shanmugam to both work through their obstinacy and pride towards a happy conventional marriage, for Mohana to earn the respect of the severely chauvinistic Shanmugam towards women’s intellectual or artistic capabilities, and to overcome the pressure from her mother and would-be suitors which constantly threatened to derail her relationship with Shanmugam.

At a temple festival, the young talented dancer Mohana is smitten by Shanmugam’s performance on the nagaswaram, a deep and powerful double reed aerophone. When Shanmugan and his musicians come off the stage after their performance, they pass by Mohana and her musicians. This introduction immediately sets up vectors of tension – as Mohana’s and Shanmugam’s eyes meet the viewers can feel the electricity. Mohana praises his music and requests him to stay in the hall to attend her dance. When he rebuffs her, saying he has no interest in seeing her dance, in a flash of pride and anger she tells him that anything he can do with his arms (i.e. play the nagaswaram), she can do with her legs (i.e. dance). This leads to a challenge by Shanmugam to meet at an unspecified future date for a competition – they will each perform a Thillana, a rhythmically challenging genre of music which often ends a bharata natyam dance recital and sometimes is performed as the last piece in a music concert as well. 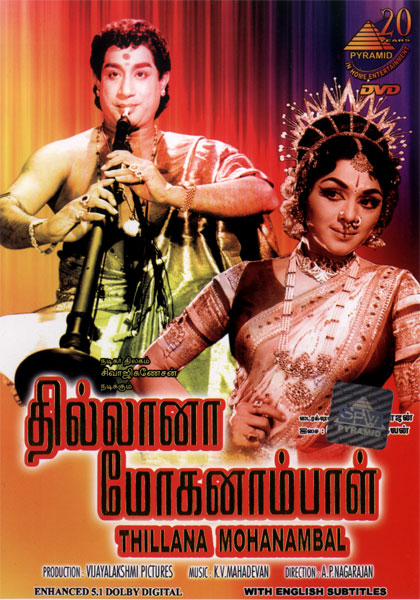 Shanmugam takes his musicians back to their dressing room in a huff, while Mohana and her musicians take the stage for their performance. At this point it looks like their love affair may never get off the starting block. Shanmugam’s musicians dearly want to see Mohana’s dance and plead with Shanmugam to be allowed to go. When Shanmugam refuses and then lies down to take a nap, his musicians sneak out of the room to go watch. Shanmugam, realizing what his musicians have done, follows them downstairs to Mohana’s concert, but due to his male pride, he doesn’t sit openly in the audience, rather, he hides behind a stone pillar. This sets up the song ‘Maraintu Iruntu’ in which Mohana teases Shanmugam for hiding like a thief rather than openly watching her dance. After the song is finished the plot takes a requisite series of twists and turns. Shanmugam and Mohana eventually do hold their Thillana competition, at the conclusion of which a Tamil sage pronounces the contest a tie, praising their dedication to true Tamil culture. Shanmugam is so emotionally moved by the excellence of Mohana’s dance that he bestows on her an honorific title, announcing that she will henceforth be known as “Thillana Mohanambal.”

Enke iruntalum unnai nan ariven
I can spot you wherever you are
Unnai ennai allal veru yar arivar
Who else knows you except me?

Nadatile talaivan kuzhal ketten
I heard the greatest nagaswaram pipe player (referring to Shanmugam)
Anda nanatil ennai nan maranten,
In the shyness that overcame me, I forget myself

Submerging me in passionate love
Oru orattille ninru kalvanaippol
And you - standing in a corner like a thief!